“… or, keeping art and culture alive in Steffisburg. Now, in these difficult times, more than ever.”

Kunsthaus Steffisburg – what do they do there exactly? It all started with Hanswalter Graf’s refreshing idea of transforming the old bus station by adding a multi-coloured curtain façade. The art project, conceived as a way to bridge the gap between the earlier exhibitions in the Villa Schüpbach and the Art Container that now takes place every three years, was then implemented by the cultural commission of the town of Steffisburg in 2013. The old abandoned bus station “Steffisburg Dorf”, where no bus had stopped for a long time, became an “art space”, a flexible and changeable art project and a place for cultural encounters that stands out in Steffisburg’s townscape. 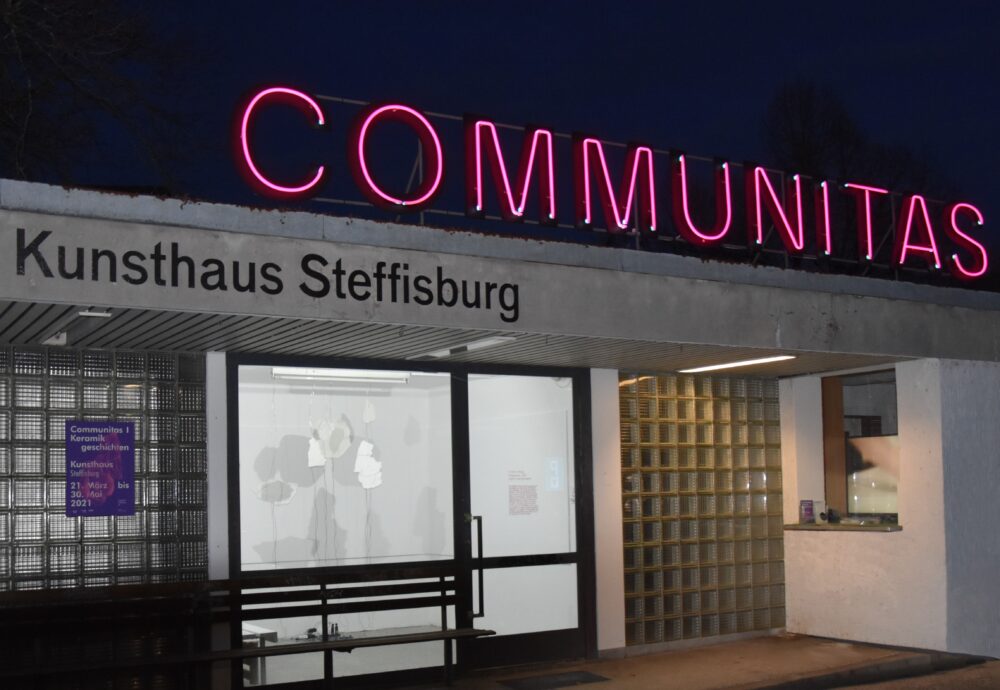 After several small exhibitions, after the colourful wooden façade was dismantled in the course of a two-year project involving five artists, and also after the dissolution of the cultural commission, what remains is a commitment to art and the joy of creation. The project idea “Kunsthaus Steffisburg” is alive and well – and aspires to continue spreading art and culture in Steffisburg. In 2018, the Kunsthaus Steffisburg Association was formed by those “left over” from the past along with friends and family, and Christoph Rihs was recruited as curator. For its inaugural programme, the Kunsthaus opened in September with a new form of group exhibition titled “Bestiarium Helveticum”. Since then, ten further exhibitions, projects and performances have been realised under the direction of Christoph Rihs. To top it all off, we received an invitation from the Cantonale Berne Jura Association to attend the Cantonale as a guest on the occasion of its 10th anniversary.

Our aim as an association is to provide fresh impulses with our activities as we invite visitors to engage with new viewpoints, content and forms. As a small art space, we enjoy much more freedom in terms of orientation, activities and programme than larger institutions, but we also have much less funding at our disposal. What matters most to us is to maintain not only our flexibility but also the high quality of our programmes, and also to continue reflecting the joy of creativity and improvisation. But it is only with the support of the public sector, the town of Steffisburg, the city of Thun and the canton of Bern, as well as through cultural sponsorship by private institutions, that we are able to put our plans into practice. We are also aided in our endeavours by the “big players”, such as the Kunstmuseum Thun, from whom we receive not only a great deal of inspiration but also regular technical support. We would like to especially thank Simon Stalder, who was already on board for our first installation in 2013.

There are a few recent developments to report. A new team consisting of Urs Dolder, Jakob Jenzer, Hanswalter Graf, Wilfried von Gunten and Christoph Rihs will now be advising us and guiding the association’s artistic alignment and programme. Three young women from Zurich, Domenika Chandra, Hanna G. Diedrichs née Thormann and Anna Schiestl are curating the programme “Communitas” in 2021. Artists will reside for two months in the summer in the “Metzgerei”, our new satellite location in the former Lüthi butcher’s shop in Oberdorf. See our website for additional information. You can also register for our newsletter there and become a member or patron. We appreciate your interest and your visit!